Geopandas and streamlit to display local tree data in deckgl

I'm not a good programmer.  85 times and about two hours total.  That's how many edits and saves before I got something out the front door that might pass as an "app" by some definition.  If you're looking for the Tableau experience this is not it... yet

https://share.streamlit.io/alibama/cville-trees/main - here's a link to the app.  It filters trees from the UVa equity atlas http://equity-atlas-uvalibrary.opendata.arcgis.com/ based on species, and allows the user the ability to change the size of the marker for the tree on the map.  Eventually I want to do some canopy analysis, and this is a small start.

The Streamlit components in markets as diverse as molecular structure visualization or building a Voronoi maps of Trader Joe's distributions evidences that their team is considering a big picture - and to be able to get a relative non-programmer like myself using a tool and getting a draft out the door in one day is pretty impressive.

My workflow went between Sreamlit's discussion boards located here https://discuss.streamlit.io/ and a bit of stackoverflow... given that i now have a Python app akin to what jupyter and voila aspire towards, or Shiny apps in R achieve with a nifty backend in github that really simplifies developing. 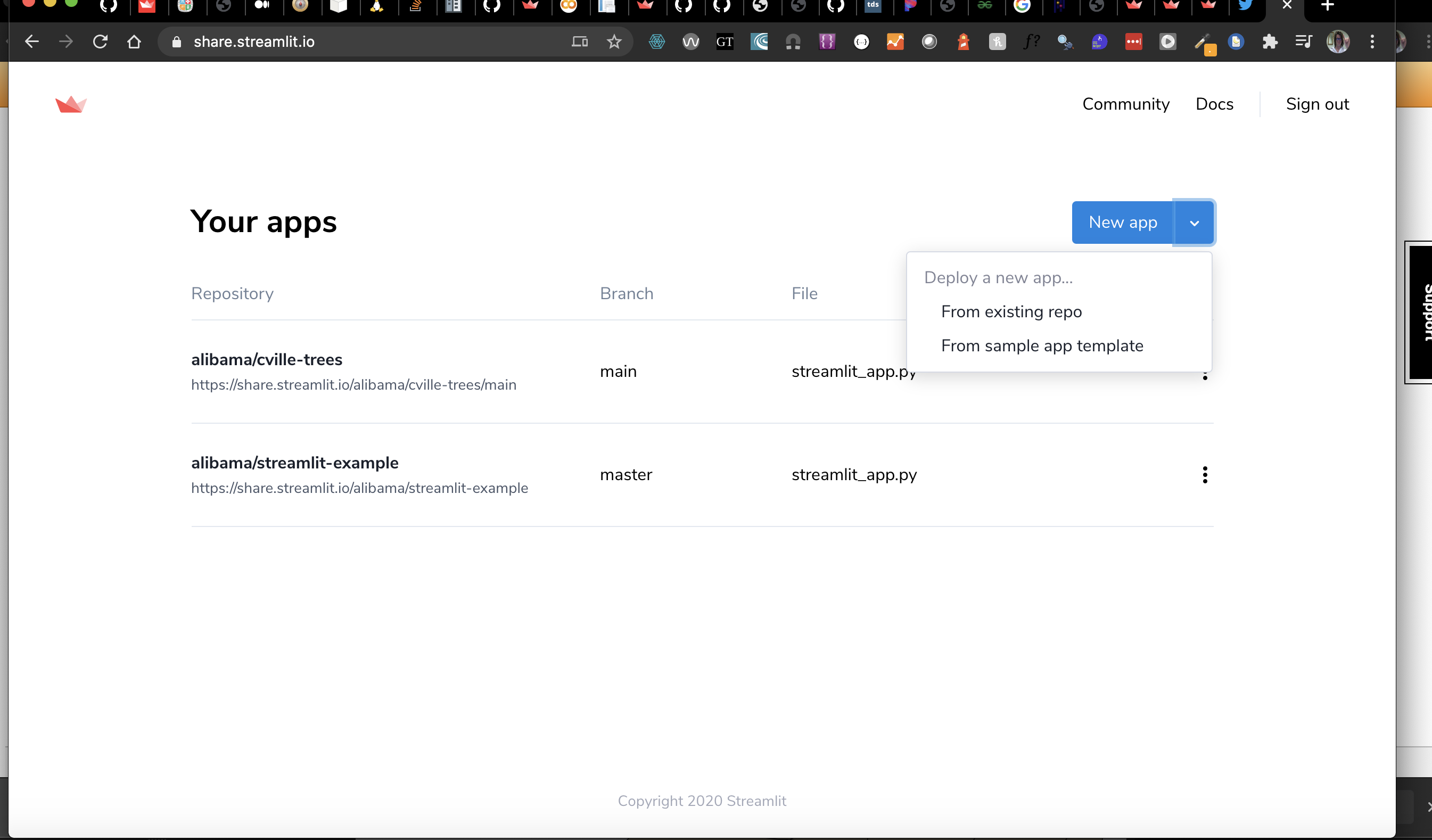 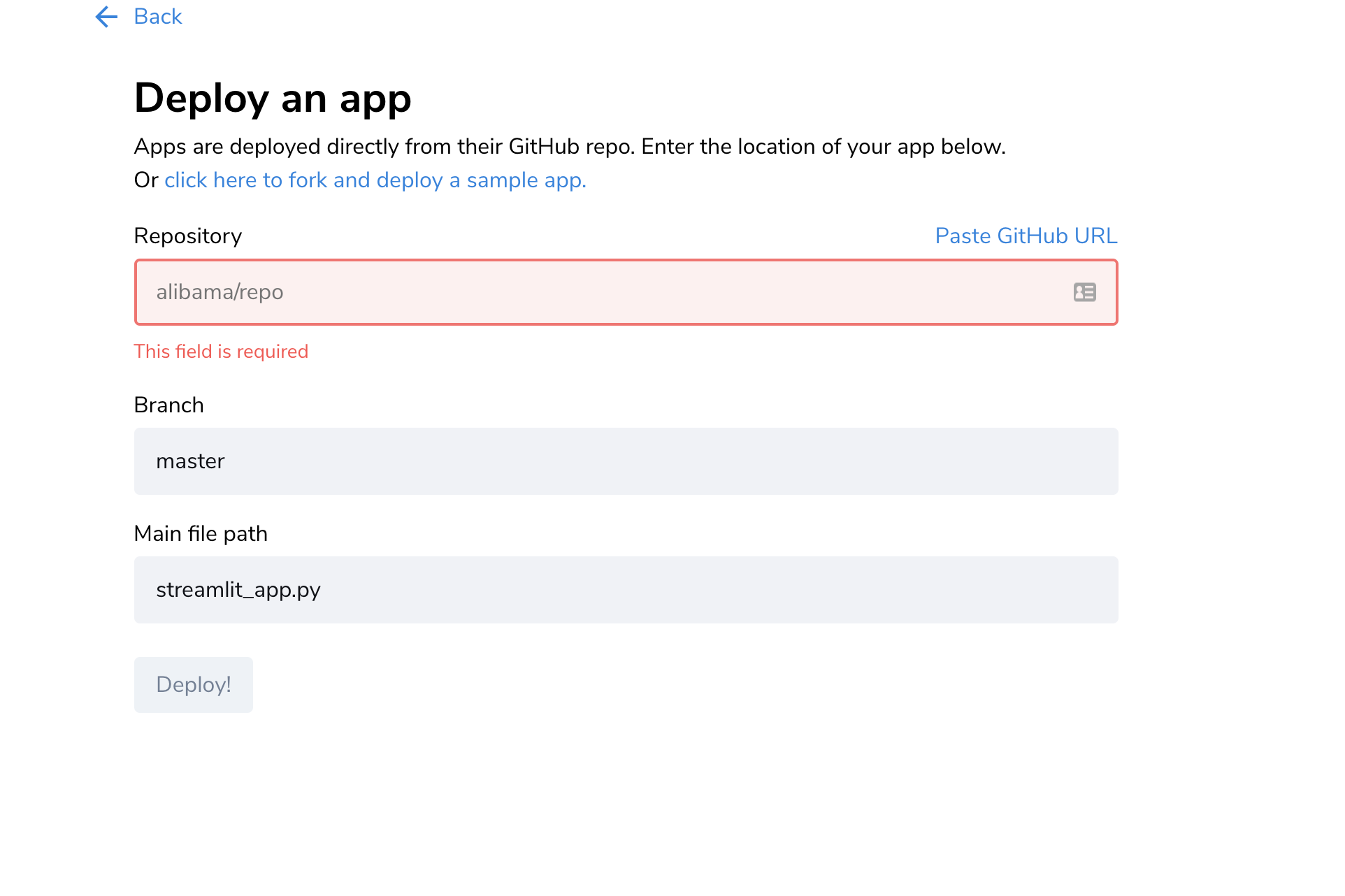 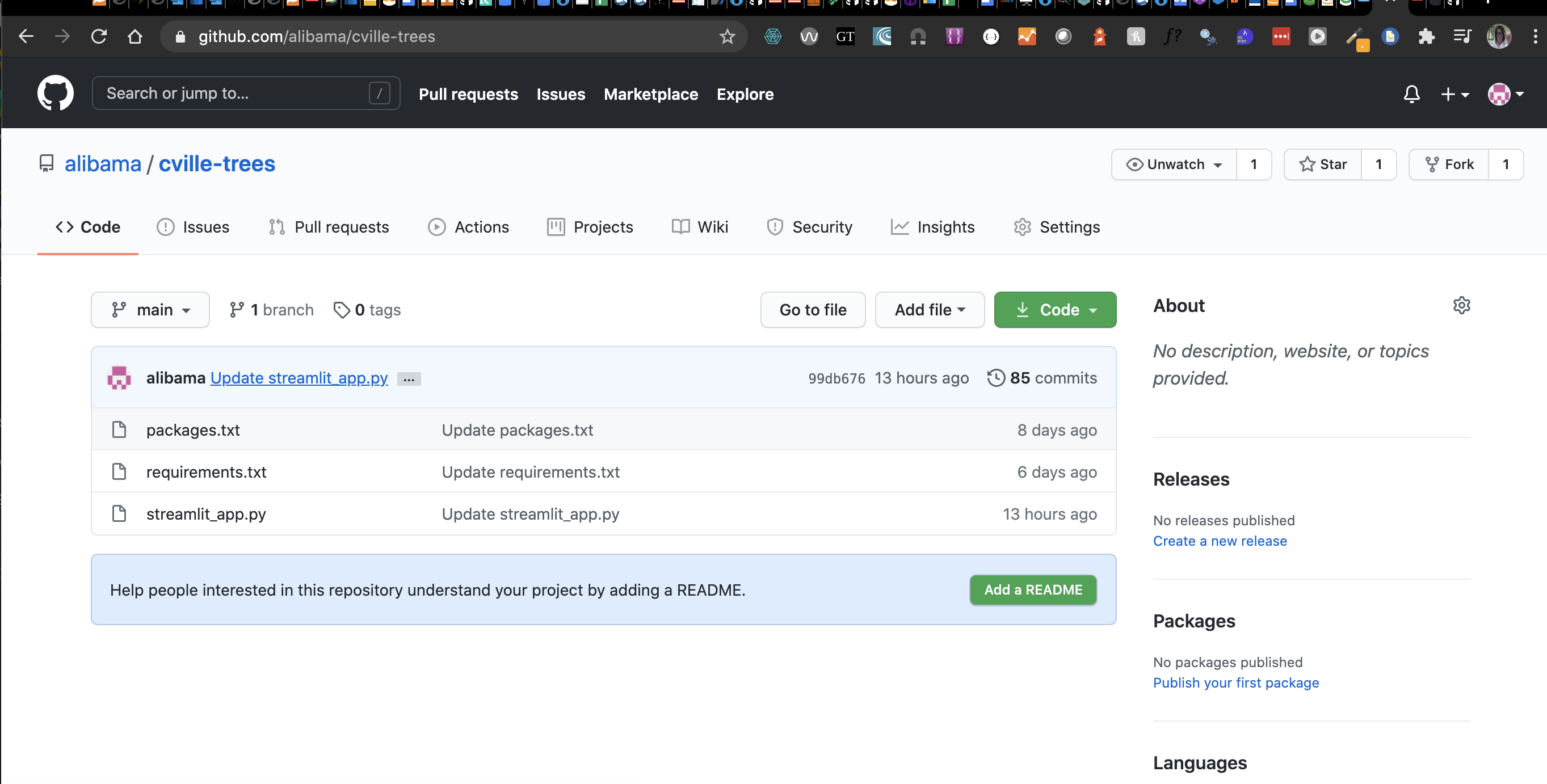 Streamlit Sharing is still in beta, however I got my invitation to participate within an hour or so of request, maybe sooner.... i don't recall.

Streamlit Sharing connects github.com's infrastructure to a containerized Streamlit server to allow essentially no-click app creation - hit save in github, the app automatically updates on the streamlit side almost instantly - no other commands necessary.

This is a screenshot of a streamlit github repo with three files - the streamlit_app.py file that holds the python scripts and references the data.  The requirements.txt file contains python packages that would normally be installed with pip - to be honest i'm not sure how or whether conda is part of this process.  Lastly there is the packages.txt file that contains references to binaries that would be typically installed through apt-get in basic debian repositories.

In our example we have the following Python libraries in our requirements.txt file

Our packages.txt file has the following lines

Once the packages.txt and requirements.txt files are in the repository they will be automatically discovered during the app baking process.  Adding new sources in to these files may require you to reboot the app - and this brings us in to the first bit of streamlit infrastructure 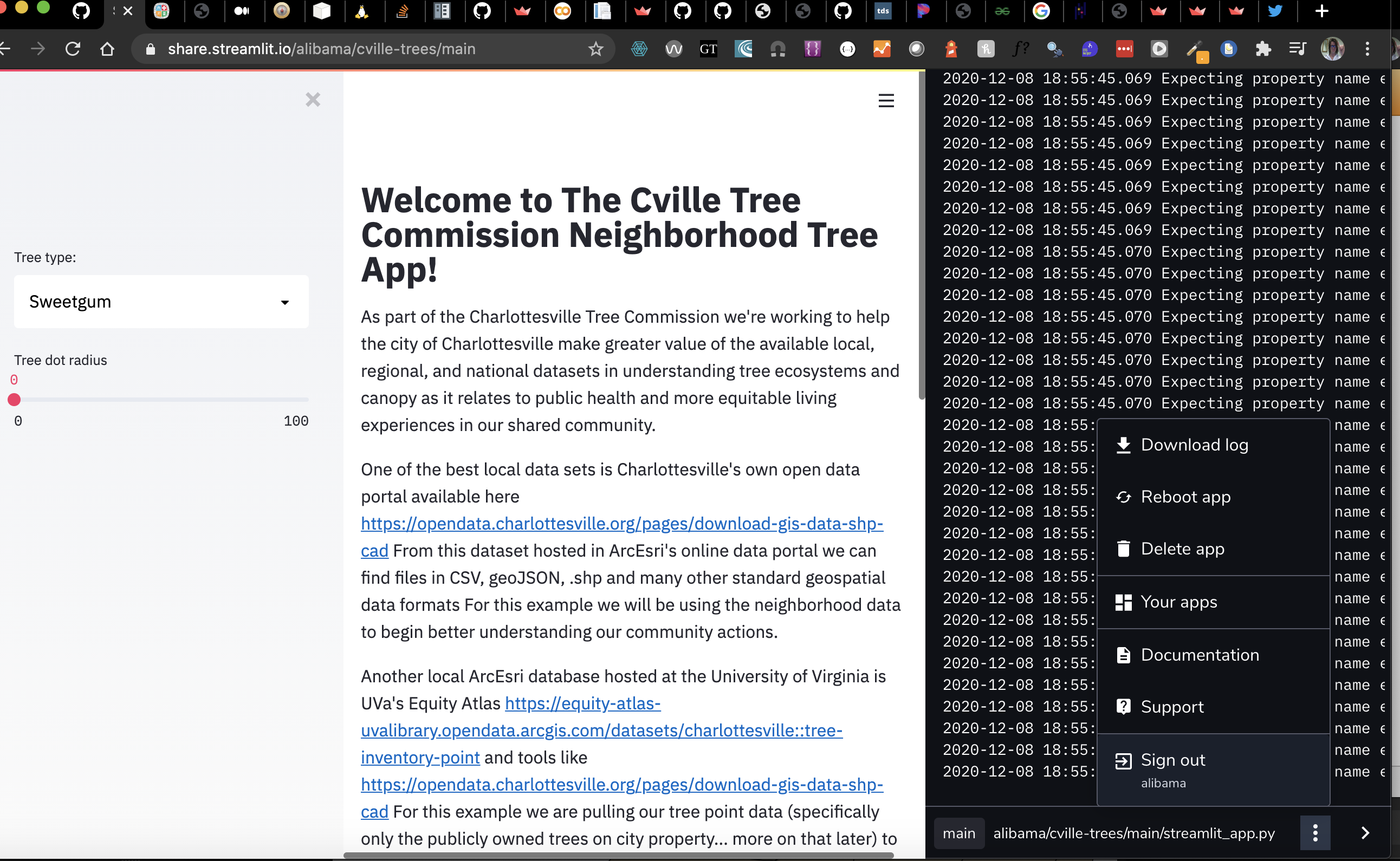 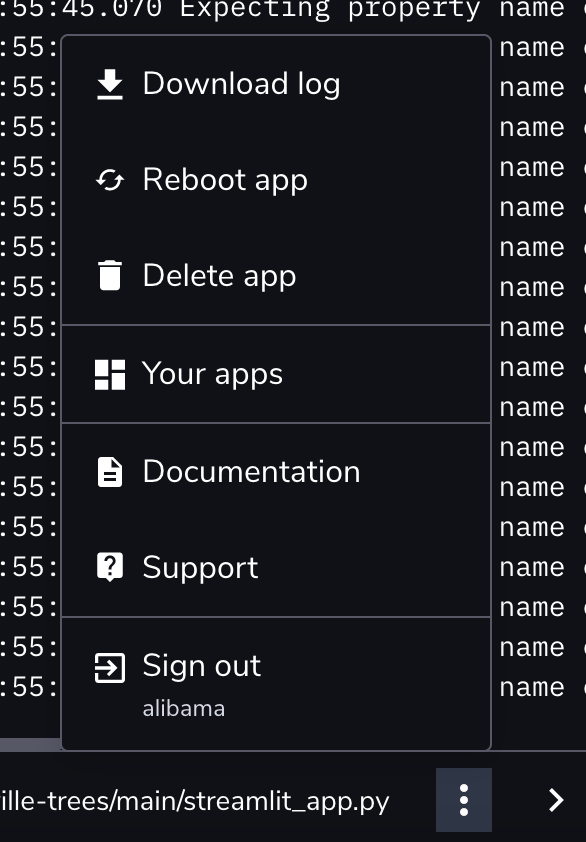 Inside the app itself is a pretty light logic load.  I really like deck.gl, however hadn't really worked with it before - it's pretty elegant and comes with some neat pan-tilt tools i haven't seen front and center before... has a modern design flavor to it in general

treetype = trees['Common_Name'].drop_duplicates() # select all of the trees from the dataframe and filter by unique values to create a useful dropdown menu list
tree_choice = st.sidebar.selectbox('Tree type:', treetype) # render the streamlit widget on the sidebar of the page using the list we created above for the menu
trees=trees[trees['Common_Name'].str.contains(tree_choice)] # create a dataframe for our deck.gl map to use in the layer as the data source and update it based on the selection made above

and similarly here's a streamlit slider widget for controlling the size of the points inside the deck.gl map

And that's really all i've done so far.  In the next part of this work I'm hoping to start doing some actual geopandas data processing to see where Ash trees land on or near existing buildings as we did in this jupyter notebook + geopandas tutorial here https://guides.hsl.virginia.edu/it-services-blog/zoombites/using-tree-data-in-a-python-3-jupyter-notebook

An enormous shout out to Randy Zwitch who leaned in on the forums and Martin Fleishman of Geopandas for encouraging me to do something useful like documentation ;)  It's a pleasure to be a part of an internationally diverse community - something that Open Source continues to deliver.